Nokia Has Me Again

No wait, that rumor got it wrong It's this, now formally announced: 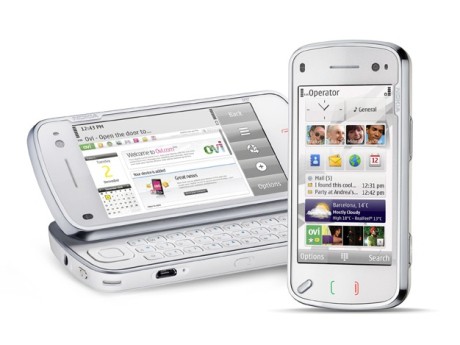 The memory size of 32GB is indeed astounding, until you realize that is pretty much what Apple is rumored to do for iPhone 3 in 2009. Which is bound to come out at the same time, because Nokia has only committed to H1 09, and that ain't Q1 09. That means Q2. And from the arms length they kept the press crew at during the unveiling today, it's obvious for Nokia watchers this thing needs plenty of work done before release. On the other hand, do realize that phone software gets worked on to the very last moment, when it suddenly congeals from pieces into something, and in the last months suddenly becomes stable and great, where 6 weeks earlier you may have wondered HTF they were going to release this on time. It's just how that works.

Having a keyboard is great, I think it actually makes people who are heavy text users likelier to buy, because the skepticism towards on-screen keyboards always remains, and with a slider like this there's no compromise with screen real estate. Which, by my calculations, is around 190 to 200 ppi, pretty sharp, pretty high. It will make that dashboard of your online social life Nokia's pushing on these screenshots actually pretty usable while in the press shots on your standard monitor it looks like a blurry mess.

But is it any good? Will people flock to it? The only thing, IMHO, that decides that in Europe is cost. Seriously. I have seen so many people complain about their slow under-performing phones, to then hear that they just went for the free model because they didn't want to pay. If Nokia wants this to outsell the iPhone, it needs carriers to offer it for the same price, and the same plans, including Don't-Have-To-Think-About-It-Data. And only then will software quality matter. If the quality and integration and snappyness and consistency are abysmal, people will bring the phone back and buy something else. If it is acceptable, people will keep them.

Just make sure they demo well in the shop.